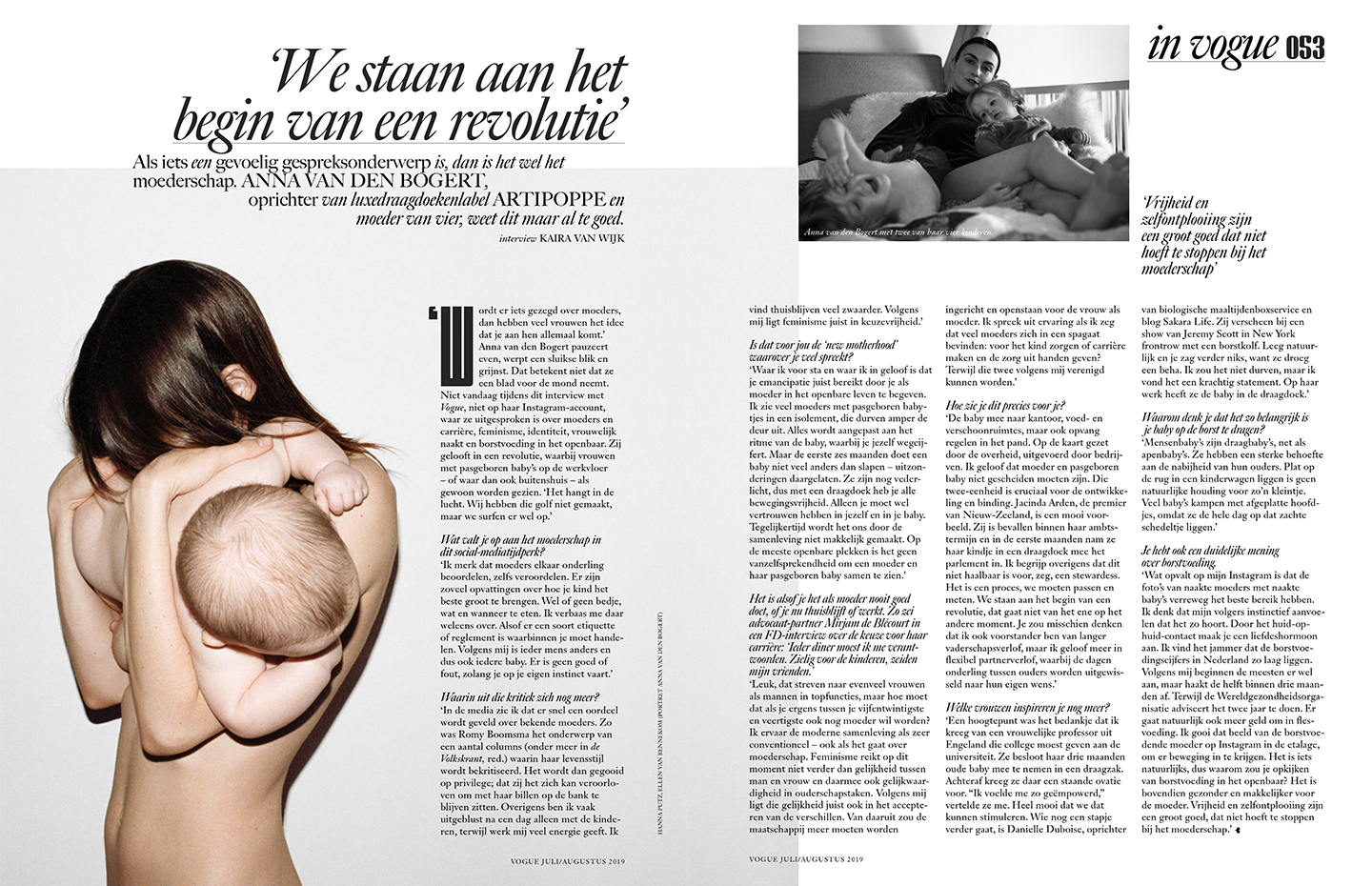 ‘We’re standing at the dawn of a revolution’

If ever there was a truly sensitive conversation piece, it’s motherhood.

ANNA VAN DEN BOGERT, founder of exclusive baby carrier label ARTIPOPPE and mother of four, knows this all too well.

‘When something is said about mothers, many women put their defences up.’ Anna van den Bogert pauses, gives a knowing look and grins. She’s not mincing words.

Not today during this interview with Vogue, not on her Instagram account, where she doesn’t hold back on motherhood and career, feminism, identity, female nudity and nursing in public. She believes in a revolution, where women with newborns in the workplace – or in any public setting – becomes the accepted norm. ‘It’s in the air. We didn’t cause the wave, but we’re surfing it.’

What have you noticed about motherhood within the era of social media?
‘I’ve noticed that mothers judge, and even condemn, one another. Best parenting practices know no bounds: crib or no crib, when and what to eat. This continues to surprise me. As if there is a sort of etiquette or regulation to be observed. I believe in the uniqueness of each individual, including babies. There is no good or bad, as long as you trust your instincts.’

Where else is this criticism expressed?
‘In the media I’ve noticed an alarming succession of judgement of mothers in the spotlight. Romy Boomsma, for example, was the subject of several columns [including the Volkskrant, Ed.] criticising her lifestyle. It’s credited to privilege; that she can afford to stay at home, planted on the couch. Let’s get one thing straight; I am worn out after a day alone with the kids, and I top up my reserves in the workplace. I find staying home to be much more exhausting. I believe feminism lies in freedom of choice.’

[Quote: ‘Freedom and self-development are a great good that need not be stopped by motherhood]

Is this the concept of the ‘new motherhood’ that you often speak of?
‘What I stand for and what I believe in is that emancipation can be achieved by mingling in the public eye as a mother. I see many mothers in isolation with their newborns, barely daring to make their way out of the house. Everything is adjusted to suit the baby’s rhythm, suppressing one’s own identity. The truth is, however, that a baby does little more than sleep during the first six months of life – with some exceptions. They are also very light, and full freedom of movement is granted by a baby carrier. All you need is confidence in yourself and your baby. In many public spaces, seeing a mother and her newborn baby is not a given.’

It is as if a mother can do no good, whether staying at home or working. Legal partner Mirjam de Blécourt comments in an FD interview about choosing to pursue her career: ‘I had to defend each dinner party. Poor children, my friends would comment.’

‘It’s all well and good, aiming for an equal men-to-women ratio in top positions, but how are you expected to keep up if you hope to become a mother somewhere in your twenties or thirties? I have found that modern society is highly conventional – also in terms of motherhood. Feminism is currently limited to the equality between man and woman, and therefore also equality in parental roles. I think that this equality actually lies in the acceptance of differences. This should become integrated within the foundation of society. I speak from experience when I say that many women find themselves torn: take care of the baby or focus on my career? While these two things can actually be united.’

How do you think this can be achieved?
‘Take the baby to the office; design in-office feeding and changing rooms and offer childcare. Introduced by government and implemented by organisations. I believe that mothers and newborn babies should not be separated. This entity is crucial for development and bonding. Jacinda Arden, Prime Minister of New Zealand, is a prime example. Having delivered within her political term, her baby joined her in Parliament the first few months in a baby carrier. I do understand that this is not realistic for, say, a flight attendant. It’s a process, we need to jump in and calibrate along the way. We are on the verge of a revolution, it can’t all be done in one go. You may think that I am also an advocate of longer paternity leave, but I believe more in flexible partner leave whereby the days can be exchanged between parents to complement their individual situation.’

Which other women inspire you?
‘A true personal highlight was the thanks received from a female professor in the UK who was conducting a university lecture. She decided to take her three-month-old baby along in a baby carrier. At the end of the lecture, she received a standing ovation. “I felt so empowered,” she told me. I’m very grateful to play a role in promoting this. Someone who pushes the envelope even further is Danielle Duboise, founder of organic meal kit service and blog Sakara Life. She appeared front row in a Jeremy Scott show in New York with a breast pump. Empty of course, and you couldn’t see anything because she was wearing a bra. It’s not something that I would do, but it was a powerful statement. At work, she carries her baby in a baby carrier.’

Why do you think that it is so important to carry your baby on your chest?
‘Human babies are intrinsically suited to carrying, just like primate babies. They have a strong need to be close to their parents. Lying flat on the back in a pram isn’t a natural position for such a small infant. Many babies suffer from flattened heads as their small, soft skull is subject to prolonged pressure.’

You also have a distinct view of breastfeeding.
‘What I’ve noticed is that photos of naked mothers with naked babies on Instagram have the greatest reach. I think that my followers instinctively feel that it is natural. Skin-on-skin contact produces a love hormone. It’s really a pity that breastfeeding statistics are so low in the Netherlands.
I think that the majority get a good start, but finish nursing within the first three months. While the WHO advises breastfeeding infants for two years at least. It goes without saying that there’s money to be earned in formula. I showcase images of nursing mothers on Instagram to keep things moving. It is something natural, so why should public nursing turn any heads? It is also healthier and easier for the mother. Freedom and self-development are a great good that need not be stopped by motherhood.’